A new mud volcano has erupted in the sand near the coast in Balochistan’s Pasni district. The small mud volcano is located near Zarreen Rock, about 5 kilometres from Pasni town, and it has been coughing out a muddy liquid for at least two weeks now. Local residents in Pasni have been visiting the site with great interest to see it for themselves, some calling it a miracle.

The video of the mud volcano below was shot by a PakVoices citizen journalist last week (click on the image to play):

The Pakistan Geological Survey told PakVoices that none of its officials had visited the site of the mud volcano since its eruption last week. “We have no information about the volcano,” Director Planning Nazar-ul-Islam told PakVoices over the phone. “Usually, the local administration informs us of any such phenomenon and then invites us, after which we depute a team to closely examine it.”

Mud volcanoes are a well-known phenomenon which usually occur when underground pressures significantly increase the temperature of water. This water then dissolves different substances in the earth, taking on a muddy composition and pushing through Earth’s surface. In most cases, methane gas is also ejected as part of the process.

The Makran region of Balochistan features a number of other mud volcanoes. These include Baba Chandrakup, a mud volcano which is thought to be one of the largest in the world. It is situated on the way to Hinglaj, the destination of a pilgrimage trail for the local Hindu community. During the pilgrimage, the pilgrims stop by the Baba Chandrakup volcano and perform rituals.

Report and photos by: Naeem Baloch 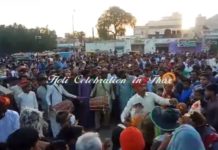 People in Tharparkar celebrates Holi with full zeal and enthusiasm